In Halo Combat Evolved and Halo SPV3, it is stored in a small, glass-like pyramid. A person can use the light-bending energy by merely coming into physical contact with the container, which will cause it to break and release its contents. Upon release, the energy envelops the wearer and bends light around their skin, armor, or shielding, conforming to their form and rendering them almost invisible. However, there will be a very faint outline of the player along with a distortion of the image. At that point, the energy will gradually dissipate and wear off, slowly revealing its user.

Active Camo is most commonly used by Special Operations Sangheili and Stealth Sangheili. However, all varieties of MJOLNIR armor that are Mark V can use it. 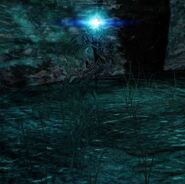 John-117 under Active Camo. Note the distortion of light.
Add a photo to this gallery
Retrieved from "https://halo-spv3.fandom.com/wiki/Active_Camo?oldid=3470"
Community content is available under CC-BY-SA unless otherwise noted.