An Overshield is a form of cuboid Covenant-developed technology that strengthens the energy shielding system of the user. 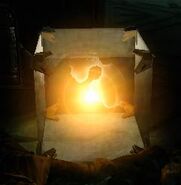 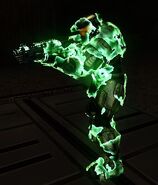 Effects of the Overshield.

Thel with Overshield in the Commander: Evolved.
Add a photo to this gallery
Retrieved from "https://halo-spv3.fandom.com/wiki/Overshield?oldid=3579"
Community content is available under CC-BY-SA unless otherwise noted.