The Dropship 77-Troop Carrier, abbreviated D77-TC, or more commonly known as the Pelican, is an extremely versatile aircraft used by the UNSC. Used mainly for medium-lift operations of various personnel, vehicles and equipment, it can also be used as a powerful support gunship.

The D77-TC Pelican is mainly used for the rapid insertion and extraction of ground troops. They may deliver vehicles and vital equipment to the battlefield when required. The D77-TC has been in service for over fifty years, and is the primary tactical support aircraft of the UNSC.

The Pelican is a multi-role aircraft; it is fully capable of atmospheric flight and can land almost anywhere without difficulty. The Pelican is also capable of limited spaceflight, which the UNSC uses as a primary method of delivering troops to the surface from orbit. Standard armament consists of one Class III externally powered projectile weapon at the bow of the craft, and another one at the rear, in the extended crew area.

Generally the D77 can not be piloted or operated by the player, but often delivers ordnance during battle or is the starting point for the mission. 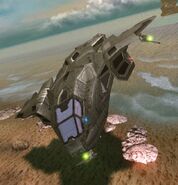 Retrieved from "https://halo-spv3.fandom.com/wiki/Pelican?oldid=3650"
Community content is available under CC-BY-SA unless otherwise noted.