The Type-29 Anti-Vehicle Stationary Gun, more commonly referred to as the Shade, is a Covenant stationary gun turret.

The Shade is a stationary gun used to fortify Covenant-held combat zones and provide fire support for infantry units, and is commonly operated by specialist Grunt Gunners or, occasionally, by Elites.

The Shade turret consists of a concave gunner seat hovering on an anti-gravity tripod mount. Attached to the front of the seat is a heavy plasma cannon that fires 2 plasma bolts per shot, which can easily kill unarmoured infantry and are powerful enough to destroy lightly armoured vehicles in several shots. However, the slow movement speed of the bolts means that they can be avoided by faster vehicles, and are become inaccurate at longer ranges. Gunners manning the Shade are also exposed to enemy fire from all sides excluding the front, which is protected by both the heavy plasma cannon and a plasma barrier, the latter of which reflects all ballistic projectiles but shorts out after absorbing several plasma bolts. 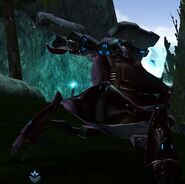 Retrieved from "https://halo-spv3.fandom.com/wiki/Shade?oldid=3249"
Community content is available under CC-BY-SA unless otherwise noted.