The SOEIV is a single occupant drop pods that could house and be operated by only one individual. Within the pod is a crash seat, communications gear, numerous equipment and weapon racks and lockers, and a rudimentary control system that allows for pod maneuvering. A "blunt carriage", a SOEIV has a single entry and escape hatch on one side. There is a braking chute system on the pod's top to slow it down and a reinforced impact plating on the bottom of it to absorb crash impact.

The hardened and shielded communications systems within a SOEIV is built directly into the pod's hatch and enables its operator to synchronize deployment with others. In spite of the pod's apparent size, there is not much room for its occupant to move around, as most of the bulk is reserved for heat shielding, electronics, the safety harness, and equipment storage. A SOEIV is coated with ceramic plating, with an alloy crash cage underneath.

To allow safe re-entry from high orbit or insertion from deep space, the top of the SOEIV possesses a rocket thruster that also serves as a maneuvering aid during the drop. The top of a SOEIV houses the pod's automated braking chute system, which itself is an extended cable attached to four petal-like flaps. The back of a SOEIV is entirely sealed off and the front often includes a variety of windows—though the latter feature is not present in every model of the pod. A gas-bolt–operated hatch system is incorporated into the pod's front half.

The drop pod acts as Lumoria's equivelent of the Bumblebee found in the main game, albeit, on a justifiably smaller scale. They are found early on in the first level as the Stalwart-class Light Frigate, Endless Horizon, launched several ODSTs on the planet to scout out the surface. Not all SOEIV occupants survived the crash landing as some died from impact via mechanical failure whilst others were simply unfortunate enough to land directly in front of Covenant encampments. These drop pods are check marks to highlight the player for potential weapons and ammunition layed scattered around the pod. 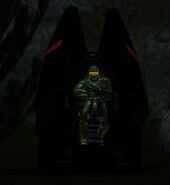 SPARTAN May coming out of her Drop Pod.

Add a photo to this gallery
Retrieved from "https://halo-spv3.fandom.com/wiki/Single_Occupant_Exoatmospheric_Insertion_Vehicle?oldid=3598"
Community content is available under CC-BY-SA unless otherwise noted.