The Type-25 Void's Tear is a special variant of the Plasma Pistol that is only wielded by certain Elite Zealots and is the predecessor of the Type-54 Void's Tear.

The Void's Tear is an experimental offshoot of the standard Plasma Pistol. Exotic nuclear isomers are introduced into the discharged plasma when firing, allowing the bolts fired from the weapon to manipulate gravitational forces of the target. As a result, enemies shot by a Void's Tear bolt will gravitate towards wherever said bolt was originally fired from.

These isomers also allow the pistol to hold an overcharge shot indefinitely without draining power. When the overcharge shot is fired, it creates an unstable gravimetric vortex at the point of impact. This vortex will drag anything that isn't nailed down (namely enemies and vehicles) towards its epicenter, damaging everything within it until it collapses in on itself and diffuses through an EMP blast. This blast can overload energy shields, disable Covenant vehicles and is often lethal against weaker/weakened enemies.

Due to it's costly production, the Void's Tear is reserved for only the highest of ranked Elites, the gold-armoured Zealots. Despite this, most Zealots issued with the Tear will use their Energy Sword out of honor, and will not bring themselves down to the levels of their subordinates and use the Tear until they are at point of near death; only then will they use weapon to cover their retreat. Additionally, its unique nuclear isomers mean that field charging stations cannot be used to recharge the weapon. 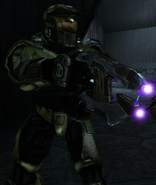 Retrieved from "https://halo-spv3.fandom.com/wiki/Void%27s_Tear?oldid=3572"
Community content is available under CC-BY-SA unless otherwise noted.