The Type-26 Assault Gun Carriage, more commonly identified as the Wraith by the UNSC, is the Covenant's main heavy assault craft for ground engagements.

The Type-26 Assault Gun Carriage is the primary armored fighting vehicle used by the Covenant. The Covenant deploy the Wraith as a first-strike ground assault vehicle in tactical ground engagements, using it as a weapons platform to bring down structures in the way of ground forces attempting to advance in an area, as well as to destroy enemy armor posing a threat to their own infantry. In addition, the Wraith is used to break the ranks of enemy infantry by both physical and psychological force.

Wielding a massive, bulbous and thickly armored mortar assault gun, the Wraith is used by the Covenant as their main armored assault vehicle for ground forces. Like all Covenant vehicles the Type-26 AGC's design is a sleek winged vehicle design more akin to an aircraft than a ground vehicle. The Type 26 AGC is composed of four major components: The chassis, is the first and major component and consists of the cockpit, which contains the controls for the pilot, these include the controls that move the vehicle, align the mortar on-target, and arms and fires the main battery. Holographic control surfaces and displays show the pilot a 360-degree view outside the Wraith. Underneath is its propulsion system consisting of a Boosted gravity propulsion drive, the chassis also contains the necessary systems that power all other systems on the vehicle. Two wide lateral fins are the second major component to the Type-26 AGC, the fins stabilize the vehicle on terrain, as well as provide the vehicle thrust to attain limited boost for enhanced maneuverability. The third major component is the rudders, which control the turning or yaw-axis of the vehicle. The rudders use two independent propulsion drives to help turn the vehicle. The fourth major component is the gun carriage, this contains the Type-26 AGC's main weapon; the heavy mortar cannon. The huge bulk of the Wraith is well shielded by an armored shell that is nearly two feet (61 cm) thick and made up of a polymer that is not understood by human physicists.

iloted by a single occupant, who controls all the vehicle and weapons systems, the Type-26 AGC is a highly maneuverable vehicle able to traverse many terrain types. The Type-26 AGC like all Covenant vehicles utilises a form of anti-gravity propulsion drive to cushion and absorb almost all of the recoil caused by the heavy mortar cannon. The Wraith's large size and its ability to provide covering fire from the massive Plasma Mortar makes it an inestimably dangerous vehicle on the battlefield. The Wraith is the third largest Covenant ground force vehicle, after the Locust and Scarab.

The Wraith has numerous appearances in SPV3 (Most notably in Assault On The Control Room and Two Betrayals.) The Wraith can be hijacked, but doing so takes a few seconds and leaves you vulnerable. 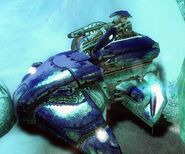 Another angle of the wraith. 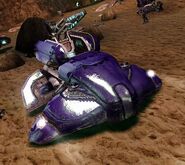 Retrieved from "https://halo-spv3.fandom.com/wiki/Wraith?oldid=3455"
Community content is available under CC-BY-SA unless otherwise noted.